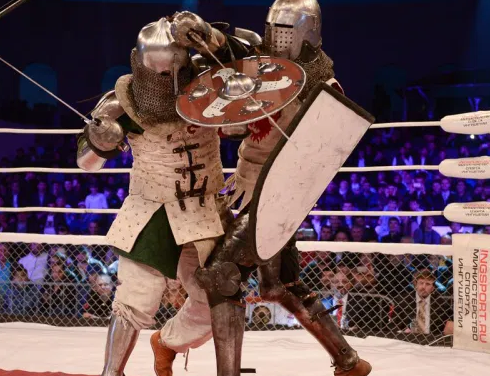 The strange sports outlined here rose out of time-honored traditions, unbearable boredom, and a couple of things in between. They’re wacky and wild in ways that you simply cannot imagine and areas impossible to categorize as they must be fascinating to watch or take part in!

Imagine for a moment two burly pugilists in their best boxing attire but with headphones attached to their chests along with the gloves they need. These extras are in place because they’re contemplating their next move on the chessboard, placed on a folding table in the middle of the boxing ring.

Welcome to Chess Boxing! Opponents in this strange sport are asked to spar mentally and physically in 11 rounds which alternate between Chess and Boxing. It stands as possibly the only competitive event in which a winner can be declared by checkmate or KO!

This is a lot like your usual pick-up Soccer game, but, instead of synthetic leather and air the ball is a coconut that’s been soaked in kerosene and then set ablaze. Fireball Soccer sees players welcoming the month of Ramadan by covering themselves in a mixture of salt and other non-flammable spices and then kicking a ball of fire with their bare feet!

While the match itself is the highlight, pre-game rituals for Fireball Soccer are just as important to those taking part. Players train their spirits to help their bodies fight the flames as they get ready for the most sacred month of the year in Islamic culture. It’s safe to say there’s no advice available for this weird sport, awash as the internet may be with good gaming guides!

One of the best-known forms of competitive eating, this weird sport sees participants trying to ingest as many hotdogs as they can in a 10-minute period. It began at American county fairs but has gone to be enjoyed by many different countries since then, including Canada and Japan.

In 1979, two Welshman, Glyn Hones, and Gordon Green debated who was more likely to win a marathon, a horse, or a man. Many other people apparently had the same question because ever since then there’s been a 22-mile, or 35.4-kilometer, marathon held in that country that sees the two compete. While men have gained first place two times, it’s the horses that usually win the race. People keep trying, however, since the prize money is a whopping US$40 000, which makes for a very nice bonus!

This underwater weird sport kicked off in 1954, as a way to keep British Diving Club members motivated over the winter season. Octopush is also known as Underwater Hockey and resembles its above-ground counterpart in many ways, though there are huge differences.

The puck weighs three pounds instead of the usual ounces, so it can glide along the bottom of the pool smoothly, for starters. Secondly, players are equipped with snorkels and wield foot-long sticks to launch strikes on their opponent’s goal. And lastly, since Octopush is an underwater game, players are limited to making quick dives to pass the heavy puck to a teammate before they have to come up for air.

For any inquirey please email us dynalisaa[at]gmail.com